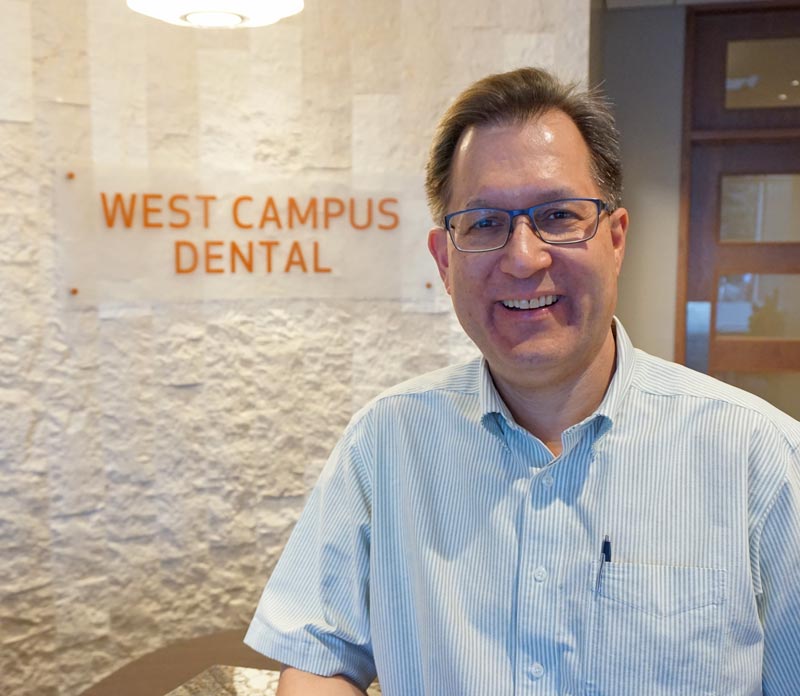 Dr. John Schmidt was born and raised in Edmonton and grew up in a very scientific household.  As both of his parents were physicians, he was immersed at an early age in the workings of the human body.  However, instead of pursuing medicine when he finished high school, he found that he enjoyed working with his hands so much that dentistry would be a more natural fit as his career choice.

Dr. Schmidt obtained his Bachelor of Dental Science degree in 1985 and graduated from the Faculty of Dentistry at the University of Alberta with his Doctor of Dental Surgery (D.D.S.) degree in 1987.  He was then chosen to enter a one-year General Practice Residency program in Dentistry for the Medically Compromised at the University of Alberta Hospitals.  Following completion of his residency in the Spring of 1988, he moved to Red Deer, Alberta where he lived for three years.  During his time in Red Deer, Dr. Schmidt served as the staff dentist for the Michener Centre and also associated with a pediatric dental specialist.  In light of these professional endeavors, he gained more experience with medically challenged patients as well as with children of all ages.

In 1991,  Dr. Schmidt moved to Calgary to join a group dental practice, allowing him to be closer to the Rocky Mountains and to enjoy more outdoor pursuits in the mountains such as hiking and fishing.  After six years in this group practice, he decided to venture out on his own as a solo practitioner and purchased Stadium Dental Centre in the Fall of 1997. Now in September of 2015 Dr. Schmidt has moved Stadium Dental to the Southwest Corner of the University of Calgary in Yamnuska hall. Stadium Dental is now renamed as West Campus Dental.

Dr. Schmidt treats a wide variety of patients from Calgary and from beyond the city limits, ranging from healthy adults and children to those with medical challenges.  He has a highly skilled team of staff who share his vision that “a healthy mouth is a cornerstone to a healthy body” and who have helped him create a dental working environment that is full of both positive energy as well as good humor.

Dr. Schmidt is always extremely gratified when patients tell him that he outlines and explains their dental realities and their dental options for treatment in a clear and straight-forward manner.  In the scope of his daily clinical practice, he and his team strive to have dentistry “make sense” to their patients and to bring “common sense” into their treatment planning and their overall care.  He particularly enjoys the artistic expression that dentistry allows him to express in his cosmetic dentistry for his patients, notably through dental treatment involving ceramic crowns and veneers.

When Dr. Schmidt is not involved in his clinical practice or attending to emergencies, he enjoys down-time with his two daughters or a quiet morning fly-fishing on the Bow River.  He is a proud supporter of CUPS (the Calgary Urban Project Society) as well as the Salvation Army, the Red Cross, and the Calgary Women’s Emergency Shelter.  He also really enjoys his music (notably the Canadian band RUSH), likes to savor a good cup of coffee, and always makes time each day to physically and mentally  “decompress” in his favorite leather recliner!

Dr. Schmidt is pleased that he has been able to help improve the dental health of so many thousands of patients over the course of his career.  He enjoys what he is able to accomplish professionally each day,  and he feels that the positive feedback that he and his team continue to receive from their patients will certainly keep him practicing dentistry for many years to come!

Friday
By Appointment Only